Donkeys are among the oldest beasts of burden in our history. They have been in our services for over 5000 years. However, the machinery, automobiles and tractors have largely displaced the donkey. It is thus time to give a new task to these clever fellows. They can be used in animal-assisted therapy (Asinotherapie), as a traveling companion, riding- draft- and pack-animals.


Originally the donkey came from the barren, mountainous regions of Africa, where they had to travel up to 17 kilometers a day to get to food and water. In Africa there are still wild stocks, but these are threatened with extinction. Worldwide there are about 180 different donkey breeds. Few, however, are registered and known as breeds. They are rather a result of geographic isolation. Spain records seven donkey races. The most important include the Catalan donkey, the Poitou donkey and the Andalusian donkey. Most donkeys are, however, crossed wild and are thus distinguished according to their size. This varies between one meter and 1.60 m. Thus there are miniature donkeys, domestic donkeys and great donkeys. They are white, gray, brown, spotted or black. A typical feature of many donkey ​​breeds is the dorsal spripe along the back and the St. Andrew’s cross in the shoulder area. 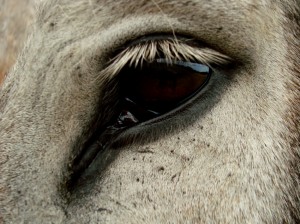 Donkeys are very social animals. They live in groups and family associations, so you should never keep donkeys alone! Among them there is no clear hierarchy as there is with horses. The donkey is blamed to be stubborn time and again. This false belief stems from the fact that he does not participate in any stupidity that we ask of him. The donkey thinks separate and independent from anyone else. Is he in danger, he first analyses the situation before he reacts. Otherwise, in the mountainous regions, from where he originates, he could easily bring himself into danger and crash. Thus his first reaction is to stop. This behavior is interpreted incorrectly by us. Note: A donkey does not stop for no reason!

With a donkey you are invited to engage in an intimate, friendly relationship. He teaches you to be patient, to relax and laugh! His harmonious aura, his calmness, his confidence and his strength as well as his lovable look with his soulful, big eyes and fluffy fur, will surely make him a faithful companion that you do not want to miss.